orn in Rome, Italy, in 1983, Riccardo Gioggi is a guitarist, composer and a guitar teacher. His solo album A Theory of Dynamics is available in digital stores, released in late 2012 by the prestigious guitar oriented label Digital Nations - owned, led and represented by the guitar master Steve Vai. This album was thought with the intent to offer intense, emotional and energetic music. A Theory of Dynamics also contains a special guest appearance by the astounding Michael Manring on fretless bass. The music Riccardo plays is an energetic blend of rock, metal, funk and progressive, in which his natural attitude for highly challenging guitar parts doesn’t ever compromise the composition, making up for a balanced mix of melody and technique. Music is the one thing that matters [says Riccardo] I obviously love to play terrific, tricky guitar parts. It’s just who I am, that’s my guitarist nature. But when it comes down to composing, I just forget what I can or can’t do on guitar. My goal is just create beautiful music at the best that I can, and then playing it at high performance levels. Riccardo is an official endorser for D’Addario strings and Planet Waves cables. 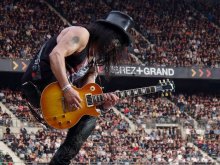 How to Play! | Steve Vai - Sisters